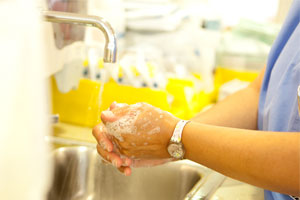 Prevention is the key to stopping the spread of many infectious diseases and sometimes can make the difference between life and death. The staff at Montefiore Medical Center takes great precautions to ensure neither they nor their patients spread diseases to other patients, visitors or staff. Outside the hospital, there are a number of easy steps that patients can take, including:

Handwashing is the single most important means of preventing the spread of infection. Unfortunately, improper or infrequent handwashing continues to be a major factor in the spread of disease.

Hands should be washed often?more frequently than most adults and children do. Because bacteria and other germs cannot be seen with the naked eye, they can be anywhere. According to the Centers for Disease Control and Prevention (CDC), handwashing is especially important:

Immunization is the key to preventing disease among the general population. Vaccines benefit both the people who receive them and the vulnerable, unvaccinated people around them because the infection can no longer spread through the community if most people are immunized. In addition, immunizations reduce the number of deaths and disability from infections, such as measles, whooping cough and chickenpox.

Although children receive the majority of vaccinations, adults also need to be sure they are already immune to certain infections and stay up-to-date on certain vaccinations, including varicella, seasonal influenza, tetanus, diphtheria, pertussis (whooping cough), measles, mumps, rubella, zoster, human papillomavirus (HPV in females), pneumococcal (polysaccharide), hepatitis A and B, flu and meningococcal. Childhood illnesses such as mumps, measles and chickenpox can cause serious complications in adults.

Proper care of your pet may prevent them from becoming ill and infecting the household. It is important to keep your pet's immunizations current, see a veterinarian for health checkups on a regular basis, maintain a clean environment as it pertains to your pet's habitat and also wash your hands when handling animals, among other precautions.

In addition, wild animals and insects can be carriers for some very serious diseases, including rabies, tetanus, Lyme disease, Rocky Mountain Spotted Fever, hantavirus and the plague. Animal bites and scratches, even when they are minor, may become infected and spread bacteria to other parts of the body.

Whether the bite is from a family pet or an animal in the wild, scratches and bites may carry disease. For example, cat scratches-even from a kitten-may carry "cat scratch disease," a bacterial infection. Bites and/or scratches that break the skin are even more likely to become infected. It is important to take immediate care of animal bites should they occur.