In It Together Patient Story 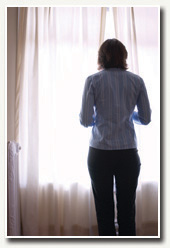 Wendy Bender, Montefiore Patient and In It Together Patient Advocate

In February 2009 — after learning she carried both the BRCA1 and BRCA2 genes-Wendy Bender elected to have a double mastectomy and a hysterectomy. Today, at 47, Wendy has completed reconstructive surgery on her breasts, feels great, and has become an active In It Together participant.

"I was blessed with a terrific support system, but most people aren't so lucky. Recently, I advocated for a woman with cancer in both breasts...a single mother with an 8 year-old son. She's here from Jamaica on a green card and works paycheck to paycheck as a home health aide. She's considering delaying her cancer treatment because she can't afford to take the time off from work. I told her that she won't be able to take care of anyone if she doesn't take care of herself first.

Caribbean women tend to be very secretive about their health, especially if the problem concerns their sexuality. They don't want to talk about it. They don't want to be a burden on anyone. And they don't think it's right to discuss things like bras and wigs with their doctors. I'm sure that's common among women of all cultures.

As a patient advocate, I want the women I help to feel comfortable telling me what they need. I tap into the 'hidden resources' of each of the In It Together members-as well as the money available through the Fund-to find the appropriate support. I want to take away the worry, because you can't heal when you're worried.

All of us involved with In It Together want to pay it forward, because we're so grateful to have come through our own journeys safely and healthy."