Twitter Chat on Cervical Cancer and the HPV Connection: January 15

WHAT:            Cervical cancer used to be one of the most common causes of cancer death in American women; however, this disease’s impact has been dramatically altered thanks to advances in screening, notably the increased use of the Pap test, a procedure that can detect changes in the cervix before cancer develops.

Cervical cancer is caused by the human papillomavirus, or HPV, which is transmitted through sex. Women and men can get HPV and it doesn’t last long in most people because their bodies can fight off the infection. But in some women, HPV can linger and cause cervix cells to change and become pre-cancer cells.

Montefiore Medical Center (@MontefioreNews), in partnership with the Foundation for Women’s Cancer  (@GYNCancer) and the American Cancer Society (ACS) of New York and New Jersey (@cancerNYNJ), will co-host a Twitter chat about cervical cancer screening and HPV, including  information about new screening guidelines issued in 2012. Gynecologic oncology expert Mark Einstein, M.D., M.S., will address other aspects of cervical cancer prevention, diagnosis and treatment, and its connection to HPV.

Mark Einstein, M.D., M.S., is a gynecologic oncologist whose primary research interests are the pathogenesis and therapy for gynecologic cancers. He was among the authors of the ACS/American Society of Colposcopy and Cervical Pathology (ASCCP) cervical cancer screening recommendations as well as the ACS HPV vaccine recommendations. Dr. Einstein is also a program leader of the Gynecology Division of the New York Cancer Consortium and is the primary investigator of many of its gynecologic cancer therapeutics trials accruing patients at New York hospitals.

Montefiore, the academic medical center and University Hospital for Albert Einstein College of Medicine, is nationally renowned for clinical excellence—breaking new ground in research, training the next generation of healthcare leaders, and delivering science-driven, patient-centered care. Recognized among the top hospitals nationally and regionally by U.S. News & World Report, Montefiore provides primary and specialty care through a network of more than 130 locations across the region.

The American Cancer Society combines an unyielding passion with nearly a century of experience to save lives and end suffering from cancer. As a global grassroots force of more than three million volunteers, we fight for every birthday threatened by every cancer in every community. We save lives by helping people stay well by preventing cancer or detecting it early; helping people get well by being there for them during and after a cancer diagnosis; by finding cures through investment in groundbreaking discovery; and by fighting back by rallying lawmakers to pass laws to defeat cancer and by rallying communities worldwide to join the fight. As the nation’s largest non-governmental investor in cancer research, contributing more than $3.4 billion, we turn what we know about cancer into what we do. As a result, more than 11 million people in America who have had cancer and countless more who have avoided it will be celebrating birthdays this year. To learn more about us or to get help, call us any time, day or night, at 1-800-227-2345 or visit cancer.org. 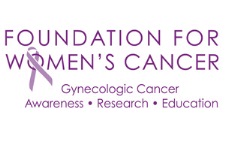 The Foundation for Women’s Cancer

The Foundation for Women’s Cancer is a 501 (c) (3) not for profit organization dedicated to funding research and training, and ensuring education and public awareness of gynecologic cancer prevention, early detection and optimal treatment. Connect with us on Facebook and Twitter.