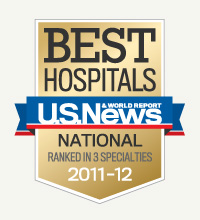 Montefiore Medical Center continues to garner national recognition with this year's rankings in U.S. News & World Report's "America's Best Hospitals" for 2011-2012. Montefiore was nationally ranked in three key specialties — Diabetes and Endocrinology, Geriatrics and Neurology and Neurosurgery and found as "high-performing" in an additional nine major service lines, including: 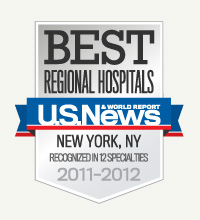 In addition, Montefiore was recognized as one of the nation's "Most Connected Hospitals," according to U.S. News and World Report and Healthcare Information and Management Systems Society (HIMSS) Analytics. Montefiore was one of only 3.5 percent of U.S. hospitals in Stage 6 of electronic medical record adoption. U.S. News defines Most Connected Hospitals as institutions that have Stage 6 or 7 and are nationally ranked or have high-performing specialties.

The national rankings are based on a rigorous U.S. News methodology which factors in a hospital's performance in areas such as patient survival, patient safety and care-related factors such as nursing, technology and patient services, as well as reputation.