A Young Doctor, Fighting for His Life

Dr. Andres Maldonado normally bounded into the Emergency Department, fit and vigorous, but this time he had to be escorted in, pale and fighting for breath, with a patient bracelet on his right wrist. A nurse, seeing her colleague struggle, burst into tears.

Maldonado was 27, a third-year resident physician with no underlying medical conditions. When he came down with a fever on March 23, he called in sick. Soon he developed a tightness in his chest and tested positive for the coronavirus.

At first he resisted the idea of seeking treatment. He was by nature stoical; in youth soccer games, other boys had crumpled when injured, but Maldonado always got up and limped through his pain. Now as a doctor — a badass emergency doctor, he jokingly called himself — he was humiliated by the thought of becoming a patient.

But on March 31, so out of breath he could barely get to the bathroom, he called his older brother, Nestor, also an emergency physician, who remembers panic in Andres’s voice.

“It hurts to breathe,” Andres told his brother. “My body aches all over. I’ve been having really bad fevers, and I’m getting, like, dizzy.”

Maldonado called his parents to say that he was going to the hospital. His dad, Jose Maldonado, was a refugee from the civil war in El 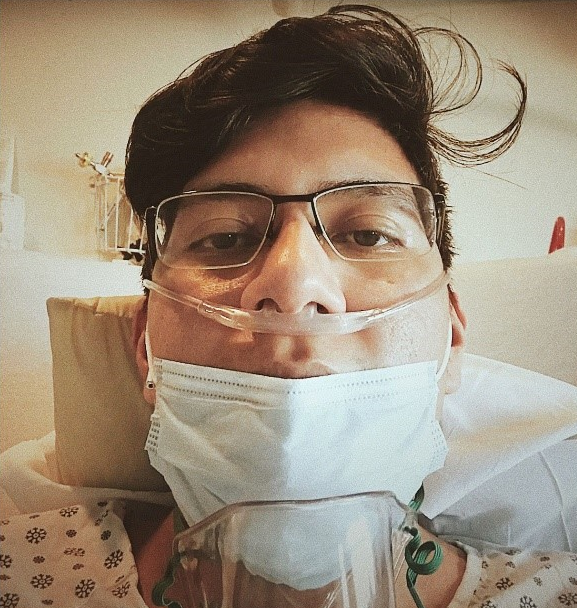 Salvador who started life over as a dishwasher in New York. His mom, Cecilia Aguilar-Maldonado, came from Ecuador, and both were undocumented for a time — yet they sent both sons through medical school. The parents were the first of many to be devastated by their son’s sickness.

“I just went down on my knees,” his mother recalled later. “I just implored God for mercy.”

She told her husband, and he began crying as she had never seen him cry before: “He was asking God to please save Andres and take him instead.”

Nicholas Kristof’s Newsletter: Get a behind-the-scenes look at Nick’s gritty journalism as he travels around the United States and the world.

Maldonado called ahead to the Jacobi Medical Center, one of several hospitals in the Bronx where he worked, and doctors there were waiting for him and gave him a room in the Emergency Department. Kelly Cabrera, a nurse who often worked beside him, spotted him and was puzzled.

“What are you doing here?” she asked. Gasping for breath, he explained that he had Covid-19.

“I tried to stay home,” he told her, embarrassed that he was giving his colleagues more work.

“I got kicked in the stomach,” Cabrera recounted. “He was one of our own.”

Cabrera and the other nurses, all of whom knew Maldonado well, took blood and gave him oxygen and Tylenol. Several scrawled a big message and placed it on the window facing him: “We Love You.”

Cabrera stepped out, weeping and also cursing. “I felt incredible anger,” she said — at America’s lack of preparation for the virus, at shortages of protective equipment, at official dithering that had left Maldonado and other medical workers at risk. At least 145 health care professionals have died of Covid-19 in the United States, according to an unofficial list kept by Medscape.

Doctors in the E.R. saw that Maldonado’s condition was deteriorating. A new wave of fever swept over him, and he curled into a ball. His heart rate shot up to 130, and he was taking 35 breaths a minute, more than twice his normal rate. He couldn’t finish a sentence without running out of air. The doctors decided to rush Maldonado into the intensive care unit and put him on high-flow oxygen.

Maldonado had been sharing his lab results and X-rays with his girlfriend, Dr. Katherine Auwarter, an ob-gyn resident in Greenville, S.C., and now he texted her that he was being admitted to the I.C.U. She called immediately.

“I’m being admitted,” he told her weakly, and his voice broke. “I’m so scared.”

“I’m going to buy a plane ticket right now,” she told him. And then, she said, they both broke down.

She knew that what terrified Maldonado most was intubation and attachment to a ventilator: He knew that a great majority of patients intubated for Covid-19 never recovered. Doctors hadn’t directly raised with Maldonado the possibility of intubation, but he could see his oxygen levels slide — and his doctors kept an intubation cart outside his room, just in case.

When a patient is transferred from the E.R. to another floor, an orderly and a nurse typically roll the stretcher there. In this case, the Emergency Department staff gathered to wish him well, and two attending physicians and a nurse together pushed Maldonado’s stretcher to the I.C.U.

Doctors tried to smile reassuringly — but it was a front.

“I was terrified,” recalled Dr. Michael P. Jones, the head of the resident program. Jones went back to his office, closed the door, lowered his head on his desk and cried.

In the I.C.U., Maldonado was placed on a high-flow nasal cannula to force oxygen into his lungs. These devices have a good record of helping Covid-19 patients but are in short supply, and not all American hospitals have them.

His doctors believed that his life was in danger partly because of his body’s own immune response, creating a cytokine storm attacking the vital organs. Doctors proposed using an experimental drug, tocilizumab, to suppress his immune response.

This has sometimes been used successfully with coronavirus patients but can also cause serious side effects; feeling desperate, Maldonado agreed.

The next day he was breathing a bit better, and the fever was gone. Slowly over several days his lungs cleared. After six days, he was discharged. The residency program insisted that he take two weeks to recover, and he used the time to reflect on life and the practice of medicine.

When he was in the E.R. as a patient, he had wanted to go to the toilet but couldn’t walk that far, and he was mortified at the thought of using a bedpan and having a nurse wipe his bottom. So, he held it in, learning empathy for patient concerns that is difficult to teach in medical school.

He now urges people to be careful and to stay home. “I hear your frustration,” he says of those protesting to restart the economy, “but what good is all the things you’re protesting for if you’re dead?”

Another lesson: Don’t be a stoic and delay seeking help when it’s necessary. “The key to all of that was the early initiation of the high-flow nasal cannula,” said Dr. Noe Romo. “Andres was at the point where if we had waited a little longer, I don’t think the high flow would have been as effective.” 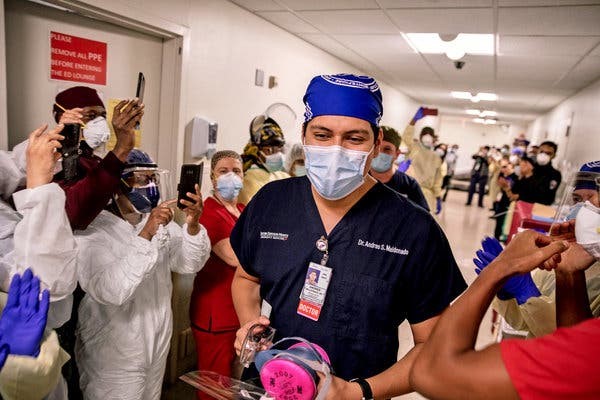 I tagged along on Maldonado’s first day back on the job recently. This was at Jack D. Weiler Hospital, and 50 of his colleagues turned out for a surprise celebration. They cheered, clapped and shouted his name.

He beamed. “I feel even more than ever that this is what I should be doing, that this is my calling,” he told me. “Maybe I got sick for a reason.”

One of his patients was a Central American woman in her 30s with the coronavirus, fear radiating from her eyes. Maldonado spoke to her in Spanish, asking medical questions but also reassuring her and telling her about his own brush with the virus.

“You know, I was in the intensive care unit,” he told her, adding teasingly, “If I got better, you have to get better, too!”