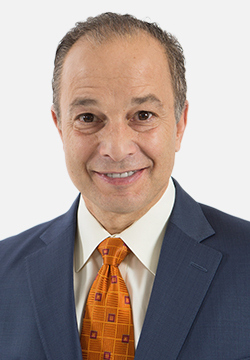 Dr. Arnold Wilson earned his medical degree from the University of Medicine and Dentistry of New Jersey. He completed his orthopaedic residency at Catholic Medical Center and completed a sports medicine and knee reconstruction fellowship at the prestigious Insall Scott Kelly Institute. During this period he was fortunate to study under Dr. John Insall who is considered one of the Pioneers of modern knee surgery.

Dr Wilson founded Wilson Orthopaedics in 2005, but began his professional career at the Central Bronx Orthopaedic Group. He is board certified by the American board of Orthopaedic surgery and a member of the American Academy of Orthopaedic Surgeons. Dr. Wilson also holds academic appointment to the New York University School of Medicine. He is a leader in minimally invasive hip and knee surgery, and has started performing Robotic Hip and Knee Surgery.