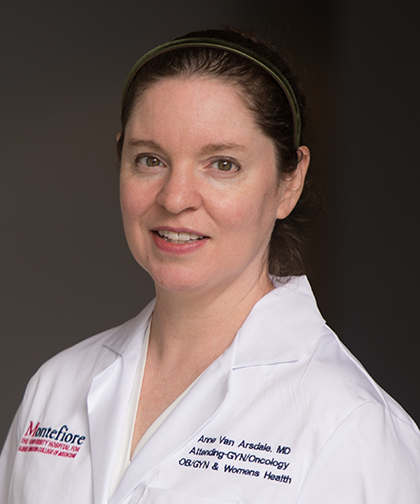 Anne Van Arsdale, MD, MSc, is Attending Physician at Montefiore and Assistant Professor at our Albert Einstein College of Medicine. Dr. Van Arsdale treats all gynecologic malignancies, with a focus on a specialized colposcopy clinic for the diagnosis and treatment of cervical dysplasias.

After receiving her Bachelor of Science at Georgetown University in 2001, Dr. Van Arsdale attended Columbia University, earning her Doctor of Medicine in 2005. She came to Montefiore-Einstein to begin her postdoctoral training with a four-year residency in obstetrics and gynecology. After completing her residency in 2009, she attended the London School of Hygiene and Tropical Medicine, earning her Master of Science in medical statistics. Dr. Van Arsdale then returned to Montefiore-Einstein to pursue a three-year fellowship in gynecologic oncology, which she completed in 2016.

Dr. Van Arsdale’s research follows her clinical focus on gynecologic malignancies. Her focus is translational research of HPV integration as a biomarker for progressive cervical dysplasia and cervical carcinoma. Her research has been published in numerous peer-reviewed journals, abstracts and posters, and she is an ad hoc reviewer for several publications including Frontiers Oncology, Gynecologic Oncology and the Journal of Lower Genital Tract Disease.

Dr. Van Arsdale is board certified and a member of several professional organizations including the Society of Gynecologic Oncology, the American Society of Clinical Oncology and the American Association of Cancer Research.