Emad N. Eskandar, MD, specializes in the surgical diagnosis and treatment of epilepsy in both children and adults. He is a world leader in this field, with more than 15 years of experience in utilizing the most current techniques. These techniques include keyhole surgery (minimal incision), stereotactic electro-encephalography (SEEG), minimally invasive foramen-ovale electrodes, vagal nerve stimulation, responsive neuro-stimulation (RNS or NeuroPace) and laser ablation of epileptic areas.

In addition, Dr. Eskandar is an expert in the treatment of trigeminal neuralgia, an extremely painful condition affecting the face. He has vast experience in all the major therapeutic treatment modalities, including micro-vascular decompression, percutaneous rhizotomy and radiosurgery. He can provide comprehensive medical and surgical care for this debilitating condition.

Finally, Dr. Eskandar treats all types of brain tumors, including meningiomas, gliomas, low-grade tumors and metastatic brain tumors. He specializes in the use of advanced brain-imaging and brain-mapping techniques to minimize the risk of injury and to maximize tumor resection. Dr. Eskandar is an expert in brain mapping and has published many seminal papers on this technique.

Dr. Eskandar heads an active basic research laboratory investigating the Basal Ganglia, a group of centrally located nuclei in the brain. The Basal Ganglia play a central role in theories of learning, motivation, depression and drug addiction. His group uses microelectrode and electrochemical recordings to evaluate the role of the basal ganglia in both primates and humans performing complex behavioral tasks. The group also uses electrical stimulation to directly modulate neuronal activity during complex behaviors. This is a unique approach in that ideas from the laboratory can quickly be tested in the clinical arena and vice-versa. In addition, his group is actively working to develop the next generation of brain stimulators that will be MRI safe, use more intelligent technological interfaces and employ the latest innovations in miniaturization and battery technology.

Excellence in Teaching, MGH Neurosurgical Residents, Given by Residents (2009) 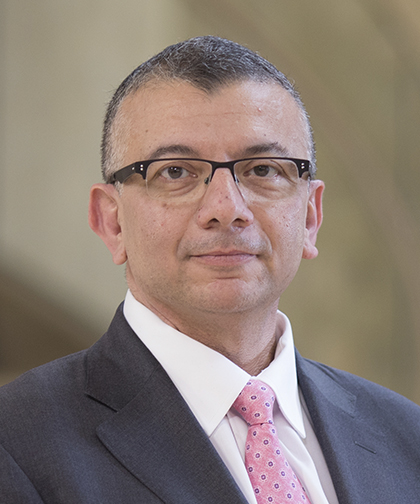