A CASE OF INDIGESTION OR CELIAC DISEASE?

A GLUTEN-FREE DIET PUTS AN END TO THE SYMPTOMS AND HEALS THE DAMAGE CAUSED BY CELIAC DISEASE.

Celiac Awareness Month offers an opportunity to learn more about a significant health issue that is often misunderstood.

Found in grains such as wheat, barley and rye, gluten is a protein that triggers an autoimmune response in the estimated 3 million U.S. residents with celiac disease. Left untreated, it can result in inflammation and damage to the small intestine, with long-term negative health consequences.

Symptoms vary in adults and children, but the most common are gastrointestinal: diarrhea, bloating, gas, abdominal pain, nausea, constipation, vomiting, fatigue and weight loss. More subtle symptoms range from anemia to headaches, joint pain and even nervous system injury. If you have digestive issues lasting more than two weeks, it’s important to see a doctor, ideally a specialist such as a gastroenterologist. 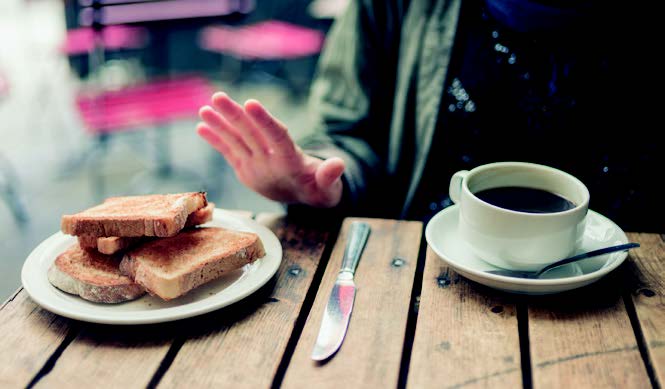 Diagnosing celiac disease is a two-step process. First is a simple blood test to screen for antibodies associated with the disease, followed by an endoscopy to take a look at what’s happening in your small intestine if you screen positive.

Once diagnosed with celiac disease, the treatment is straightforward: complete avoidance of gluten in your diet. The fact that many foods contain hidden gluten can make this a challenge, as even a tiny amount of gluten can trigger an immune reaction. Fresh fruit, vegetables and meats are naturally gluten free, and many new gluten-free products are available to replace traditional prepared foods and baked goods. For most people, following this diet stops symptoms and heals existing intestinal damage, making the effort worthwhile. 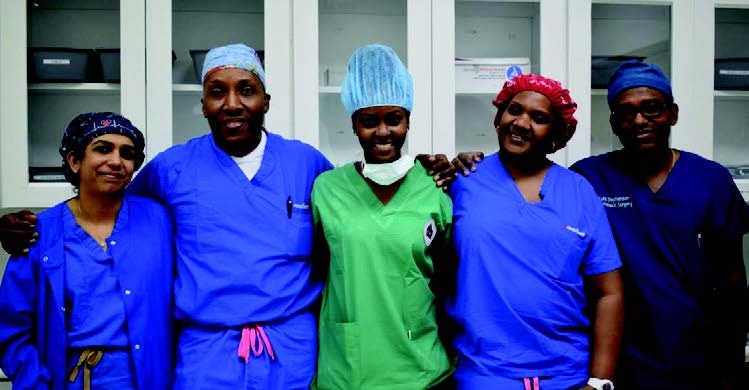 The lives of 10 adults and teenagers in Jamaica were changed forever, thanks to a team of Montefiore cardiac specialists who brought their skills and talents to treat them at the University Hospital of the West Indies. Sixteen staff members including heart surgeons, perfusionists, anesthesiologists, ICU intensivists and nurses, OR nurses, and a physician assistant treated the patients, who were debilitated by rheumatic heart disease. Using their vacation time and paying their own travel expenses, the team performed aortic and mitral valve replacement surgeries. Their patients had been suffering with heart disease most of their lives and could not afford such surgery, though many would die without it. The Montefiore team worked with the Organization for International Development, participating in its first mission to include heart surgery, and they plan to return next year.

HEELS AND WHEELS 5K IS BACK AT BURKE! 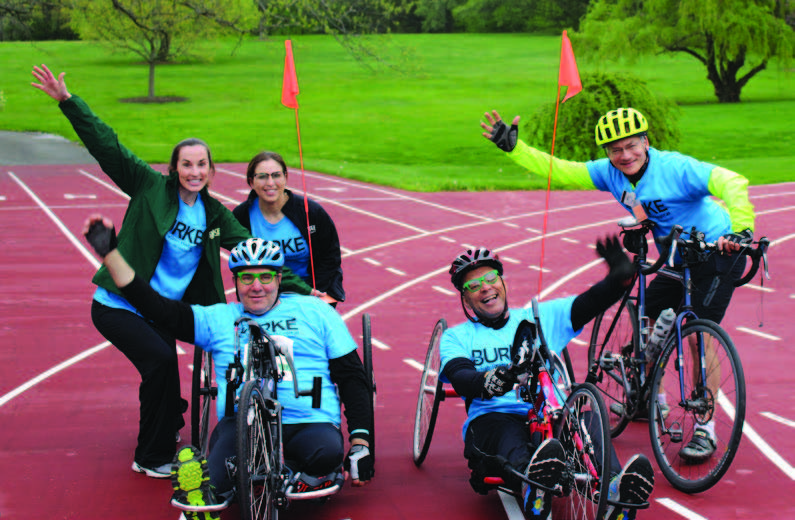 Burke Rehabilitation Hospital’s Heels and Wheels 5K Road Race and Walk will be held on May 11, rain or shine, at the facility’s 61-acre campus in White Plains. Walkers, runners, hand cyclists and racing wheelchair athletes of all abilities and levels will compete in this 5K race, in a supportive environment that fosters friendly competition and healthy lifestyle habits. The event exemplifies Burke’s mission to help people reach their maximum level of independence.

Registration begins on race day at 8:45 AM, followed by the fun run for kids ages 4–12 at 9:30 AM. The 5K begins at 10:00 AM for adults and youth athletes. Face painting, games and crafts will be offered all day.

Come, one and all, to cheer on the athletes! Volunteers are needed to help out in various areas and can receive community service hours. 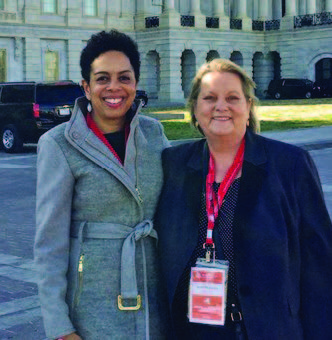 Sharon Epperson showed up at Montefiore’s White Plains Hospital emergency room with an excruciating headache, and a brain scan revealed she had a ruptured brain aneurysm. She was quickly transferred to Montefiore’s Moses Campus, where she received lifesaving surgery.

Now, Sharon Epperson and Janet McHenry, NP, a member of Ms. Epperson’s care team at Montefiore, are on Capitol Hill raising awareness about brain aneurysms. They are part of a delegation of more than 100 survivors, advocates and medical professionals who have joined with the Brain Aneurysm Foundation to educate lawmakers on brain aneurysm disease.

Learn more at http://bit.ly/epperson-aneurysm about the need for brain aneurysm research and education to save lives. Read more about Sharon Epperson’s story at www.montefiore.org/december-18-2017

MONTEFIORE SHOWS UP WITH PRIDE

Montefiore has a long-standing commitment to the LGBTQ community in our affirmed values of diversity and equity. We live these values through our LGBTQ-inclusive patient policies, employment non-discrimination practices and LGBTQ community outreach. This June, in celebration of Pride Month, Montefiore will have a full calendar of events and education hosted by the Learning Network. Montefiore will also participate in Bronx Pride events, and on June 30 more than 200 Montefiore associates and members of the community will march with our float in the NYC Pride March. NYC is hosting World PRIDE this coming June in recognition of the 50th anniversary of the 1969 Stonewall riots. We invite all associates to join our outreach efforts to promote the services Montefiore provides to the LGBTQ community. Contact Justin Toro, LMSW, at jtoro@montefiore.org to volunteer. 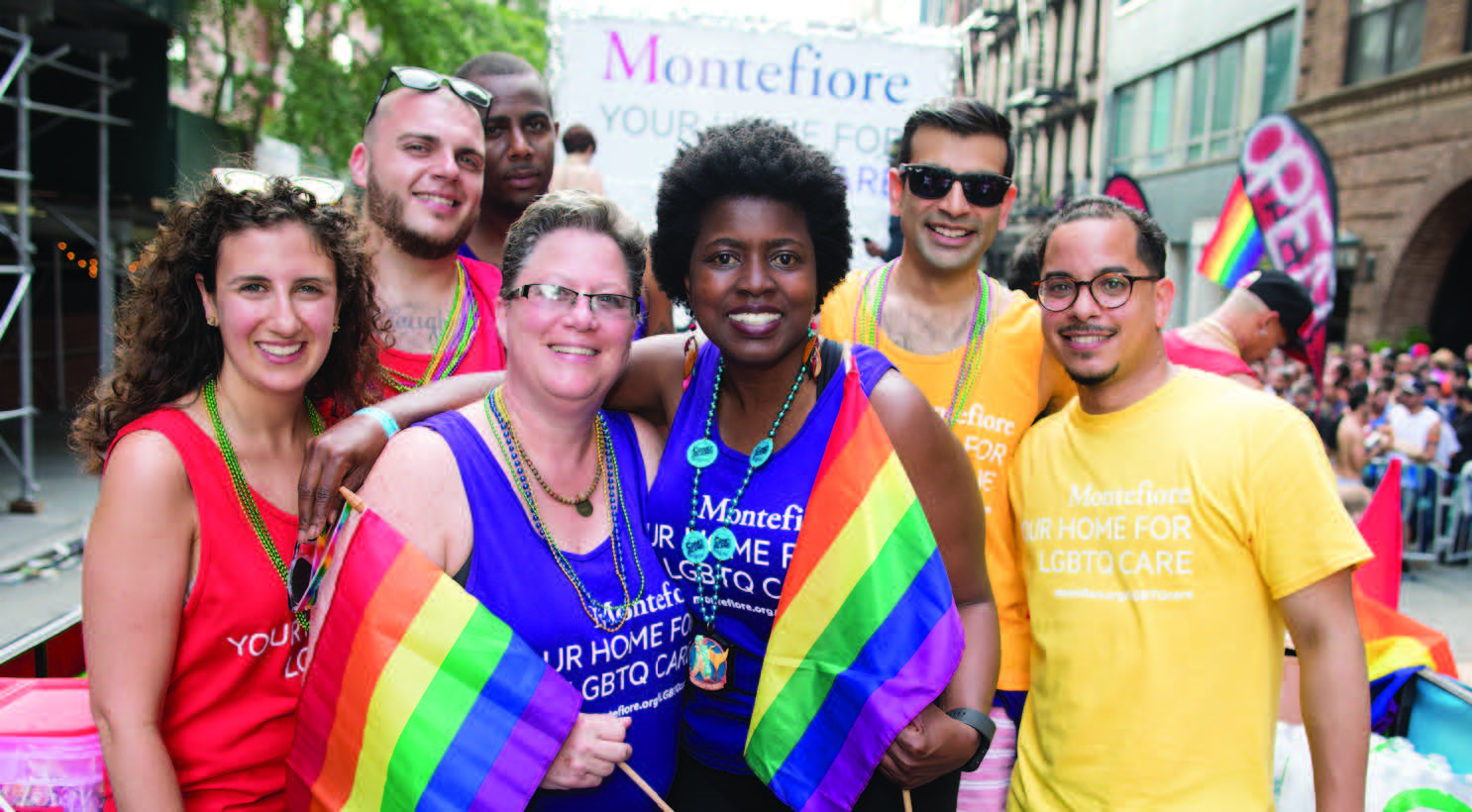 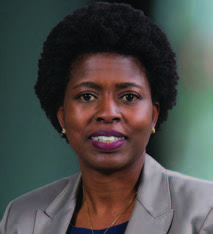 Nicole Harris-Hollingsworth, EdD, Assistant Vice President, Community and Population Health, has been selected to be part of the inaugural class of six fellows to the Aspen Institute’s Building Healthier Communities initiative, a new program designed to amplify the voices of community leaders addressing health inequities through the lens of social determinants of health. Dr. Hollingsworth will take part in Aspen’s New Voices Fellowship. 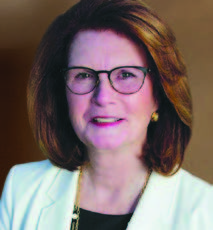 Joan Cusack-McGuirk, President and CEO, Montefiore St. Luke’s Cornwall, is being honored by the Orange County Citizens Foundation and will receive the Ottoway Medal for outstanding community leadership and commitment, and is being recognized for profoundly impacting the health, well-being and quality of life for all Orange County citizens. Ms. Cusack-McGuirk receives the Medal in a special year commemorating 25 years of honoring extraordinary Orange County citizens. 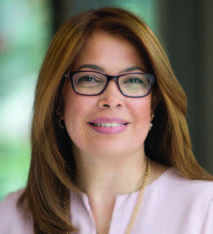 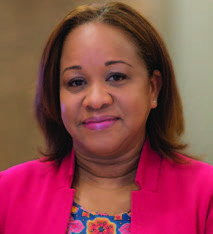 Lilliam A. Perez, Vice President, Government and Community Relations, Montefiore, has been appointed by Bronx Borough President Ruben Diaz Jr. to the newly created New York City Civic Engagement Commission. Lilliam will serve a three-year term on the Commission, which will hold its first listening tour throughout the five boroughs over the next month.

DOES YOUR CHILD HAVE AUTISM PDD-NOS OR ASPERGER’S?

If so, he or she may qualify for a research study on autism. Einstein and Montefiore are conducting a study on the genetics of autism in the African- American population.

Children who participate receive autism diagnostic testing, while parents will complete questionnaires and interviews about their child.

We collect a blood sample from each participant for the genetic testing. All information is kept completely confidential.

Participating families receive compensation of up to $150 and a report on the results of the clinical testing.

If you are interested in participating, please email childrensresearchunit@einstein.yu.edu or call 718-862-1860

CONTROLLING DEATH: AN UPDATE ON PHYSICIAN AID IN DYING

This energizing movement session invites you to move freely to the sound and beat of five different rhythms, from slow and meditative to fast and fun. It is designed for people of all ages and physical abilities. No registration is required. Contact Peter Selwyn at pselwyn@montefiore.org or 718-920-8434 for more information.

JOIN US FOR THE 5TH ANNUAL MONTEHEART

Join us for the 5th Annual MonteHeart, a two-day comprehensive course titled Innovations in Heart Failure and Mechanical Circulatory Support. Current clinical practice as well as novel and emerging therapies for the treatment of complex patient populations with heart failure will be addressed. Presented by the Division of Cardiology and the Department of Cardiothoracic Surgery, Montefiore and Einstein.