2015 was a Record Year for Transplantation 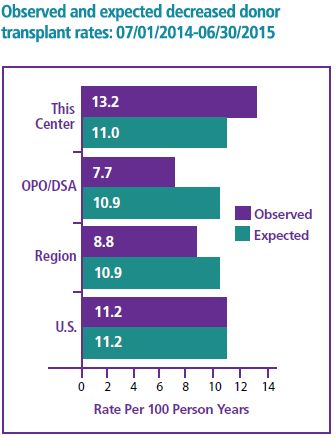 2015was a record year for transplantation at Montefiore, with 169 patients receiving kidney and pancreas transplants. The Montefiore Einstein Center for Transplantation supports a 50 member, full time multidisciplinary team dedicated to Kidney and Pancreas Transplantation, offering the highest quality transplant care and superior outcomes when compared to national and regional benchmarks.

The latest performance report published by the national Scientific Registry of Transplant Recipients (SRTR) shows that the rate of transplantation for patients on the waiting list at Montefiore is significantly higher than expected compared to other regional transplant centers and the national average. More importantly, Montefiore had the highest 1-year (92.90 percent) and 3-year (82.05 percent) deceased-donor graft survival, compared to the other three largest transplant programs in New York, while our living donor kidney program achieved a 100 percent 1-year patient and graft survival.

The Montefiore Einstein Center for Transplantation is pleased to announce the appointment of Juan Pablo Rocca, MD, FACS, to lead our nationally-renowned Kidney/Pancreas Transplantation Program.

“We are extremely pleased to have someone with Dr. Rocca’s vast expertise in transplantation and surgery lead our noted Kidney/Pancreas Transplantation Program,” says Robert E. Michler, MD, Surgeon-in-Chief; Professor and Chairman, Department of Cardiothoracic & Vascular Surgery, and Professor and Chairman, Department of Surgery. “During his tenure at Montefiore, he has proven to be an exceptionally skilled surgeon with a keen ability to grow a program in this complex healthcare environment.”

“I look forward to working with my Montefiore colleagues to provide our kidney transplantation patients with the highest level of care possible,” says Dr. Rocca.

Dr. Rocca received his medical degree from the School of Medicine at the University of Buenos Aires, Argentina. He was Chief Resident at the British Hospital of Buenos Aires and completed fellowships in transplant research and surgery at Westchester Medical Center in Valhalla, New York, as well as a transplant surgery fellowship at Northwestern University Feinberg School of Medicine in Chicago, Illinois. Prior to joining Montefiore, Dr. Rocca was Surgical Director of the Living Donor Kidney Program at the Recanati/Miller Transplantation Institute at Mount Sinai Medical Center in New York.

A native Spanish speaker, Dr. Rocca is a member of the American Society of Transplant Surgeons, where he chairs the membership committee and the American Hepato-Pancreato-Biliary Association. He is also a fellow of the American College of Surgeons.

Montefiore Einstein Center for Transplantation and St. John’s Riverside Hospital are pleased to announce a new collaboration for the evaluation of patients suffering from kidney or liver failure. Local physicians will work with transplant specialists from Montefiore to evaluate patients approaching the need for dialysis and those with advanced liver failure.

Clinical evaluations of patients will be initiated at St. John’s Riverside Hospital, allowing patients to remain close to home.

“This new, collaborative program will improve access and quality of care for very sick patients in the Westchester community,” says Milan Kinkhabwala, MD, Chief, Division of Transplantation at Montefiore and Professor, Surgery at Einstein. “There’s an advantage in being able to perform early evaluations of patients in conjunction with the patients’ primary care doctors. This collaboration will help identify patients in the earliest states of disease.” says Dr. Kinkhabwala.

Michael DiGiorno, DO, Nephrologist, St. John’s Riverside Hospital, envisions that the program will improve transplant candidacy, donation and follow-up care for patients in Yonkers. “The creation of a collaborative transplant program will facilitate patient access to this valuable service,” he says.

“St. John’s Riverside Hospital is excited to partner with Montefiore in the development of a collaborative transplant program,” says St. John’s Chief Medical Officer Paul P. Antonecchia, MD. “As we seek to provide expanded healthcare services to our community, this type of collaboration has the ability to significantly impact the level of care that we can provide locally.”

The collaboration is designed to ensure patients, their families, local physicians and transplant experts work together to preserve continuity and comprehensive care in an easily accessible manner.