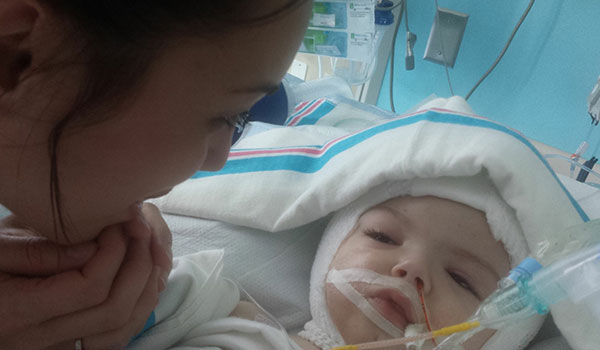 A team of expert surgical and medical providers at the Children’s Hospital at Montefiore (CHAM) have separated thirteen-month-old craniopagus twin boys Jadon and Anias McDonald. Craniopagus twins are joined at the head. This is the first time the team used virtual planning and 3D printing technologies to map their way through the boys’ attached brains in a series of complex, high-risk surgeries that resulted in complete separation on October 14th. Both boys are now recovering in CHAM’s Pediatric Critical Care Unit and while they could require further surgeries, the hospital community and family remain optimistic.

“The boys have a lot of healing to do,” said James T. Goodrich , M.D., Ph.D., D.Sci. (Hon.), director, Pediatric Neurosurgery, CHAM and professor, Clinical Neurological Surgery, Pediatrics and Plastic and Reconstructive Surgery, Albert Einstein College of Medicine. “This was unexpectedly one of the hardest cases I have ever worked on. We knew they shared an area of fused brain, but we did not know how complicated it would be until we looked inside. I am relieved that the procedure was successful. These are strong little boys and the team I work with at Montefiore is quite simply the best in the world.”

“Once again the Montefiore Einstein team is leading the way in pioneering medicine that changes lives,” said Steven M. Safyer M.D., President and CEO, Montefiore. “This intricate procedure was greatly enhanced by cutting edge 3D technology that enabled the surgeons to see inside the boys’ brains. But what really makes this case so special to me is the way our entire community is embracing the McDonald family. This is Montefiore at its best: sophisticated science, medicine and patient care are at the heart and soul of what we do.” 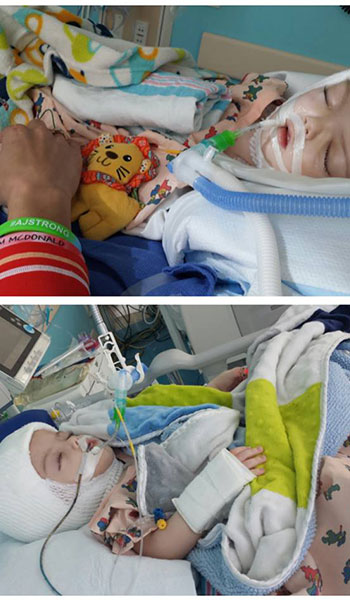 The McDonald twins’ brain separation was followed by several hours of reconstructive surgery led by Oren Tepper, M.D., plastic and reconstructive surgeon, director of the Craniofacial Surgery Program, Montefiore. Both boys’ skulls were rebuilt with their own bone and covered primarily with skin that had gradually been expanded over several weeks prior to the final surgery.

One in two and a half million live births are craniopagus. Prior to conducting the staged separation approach, which was used in this case and in the Aguirre case, conjoined twins were typically separated during one marathon operation. This often resulted in the death of one, if not both, of the twins. Since 2004, staged separation has become the standard of care for neurosurgeons, accepted by both the Congress of Neurological Surgeons and the European Society of Pediatric Neurosurgeons. Dr. Goodrich believes separating the twins in stages allows their vascular system and veins to recover between each operation. Without separation, craniopagus conjoined twins typically do not live past their second birthday.

The multidisciplinary team including Dr. Goodrich, Dr. Tepper, Joaquim M. Farinhas, M.D., neuro-radiologist, Department of Radiology, Montefiore and Kamilah A. Dowling, D.N.P., nurse practitioner, Division of Pediatric Neurosurgery, CHAM, planned each stage of the separation using virtual planning technology to create 3D models of the boys’ brains and skull. The models were used as guides for the procedures, allowing the team to carefully plan each stage in advance, mapping out the boys’ anatomy prior to incision.

Anias and Jadon McDonald were born on 9/9/2015 at 11:11pm. They spent four months in the Neonatal Intensive Care Unit at Rush University Medical Center in Chicago, until they were strong enough to go home with their mother Nicole, their father Christian, and their older brother Aza, now three-years-old. In February this year, the family moved to the Bronx, and in March, the boys underwent the first of the four staged procedures. The delicate separation surgeries have been performed over a seven month period.

“We’ve always seen our boys as perfect little babies,” said mom Nicole McDonald, “And now we feel so blessed and happy that we will get to hold them, comfort them and snuggle each of them in our arms like we have been longing to do since they were born, thanks to the amazing care provided by the whole team at Montefiore.”

The McDonald twins will likely spend several months getting rehabilitation therapies, strengthening their bodies and continuing to develop their distinct personalities.