NEW YORK (September 26, 2018) – Montefiore’s outstanding stroke care has been recognized by an Advanced Comprehensive Stroke Center designation, meaning that the highest standards of lifesaving stroke care are close to home for millions of New Yorkers.

“This designation is a landmark moment in our battle against stroke,” said Emad Eskandar, M.D., M.B.A, chair of Neurological Surgery, Montefiore and Einstein and professor and Jeffrey P. Bergstein Chair of Neurological Surgery at Einstein. “Several recent studies have demonstrated that when a multidisciplinary team delivers cutting-edge, rapid treatment, it can minimize, and sometimes completely prevent, any brain damage. We are seeing our patients return to their lives in as little as a week following treatment.”

“Montefiore has dedicated exceptional resources to making sure that everyone who arrives with a stroke will be treated by a collaborative team equipped to handle the most complex cases,” said Daniel Labovitz, M.D., M.S., medical director of Montefiore’s Comprehensive Stroke Center and associate professor of Neurology at Albert Einstein College of Medicine.

With a 24/7 in-house neurosurgeon, team of doctors, nurses, dietitians, speech pathologists, social workers and data analysts, and the ability to care for multiple strokes at once, Montefiore far exceeded the Joint Commission’s requirements to be an Advanced Comprehensive Stroke Center.

“As the busiest stroke center in New York City and the second busiest in New York State, we’re delivering the staff, skills and research-infused care that result in superior outcomes for people suffering from stroke,” said Peter Semczuk, D.D.S., M.P.H, senior vice president of Operations, Montefiore Health System. “This certification reaffirms that all our stroke patients will be treated with the highest degree of excellence, have the best chance of survival and restored quality of life.”

This care means the world to people like Heather Grzanka, a 41-year-old Westchester resident who was getting ready to watch Sunday football with her partner last winter when she suddenly had unimaginable head pain.

After going to White Plains Hospital, a member of Montefiore Health System, Heather was transferred to Montefiore’s Stroke Center where the team wasted no time. Her doctor found a ruptured brain aneurysm and acted immediately. After a successful surgical procedure to open Heather’s skull and place a metal clip at the base of the aneurysm, Heather recovered quickly. Just three months post-surgery, she was back to her demanding job at JP Morgan’s Corporate & Investment Bank.

“Everything went right in this really bad situation…I have my life back with a new perspective and a greater appreciation,” said Heather, who recently completed a 5k fundraising run with the Brain Aneurysm Foundation this month.

Heather was also impressed and grateful that her partner was informed every step of the way, including talks with a Montefiore nurse practitioner, who shared what to expect during recovery. 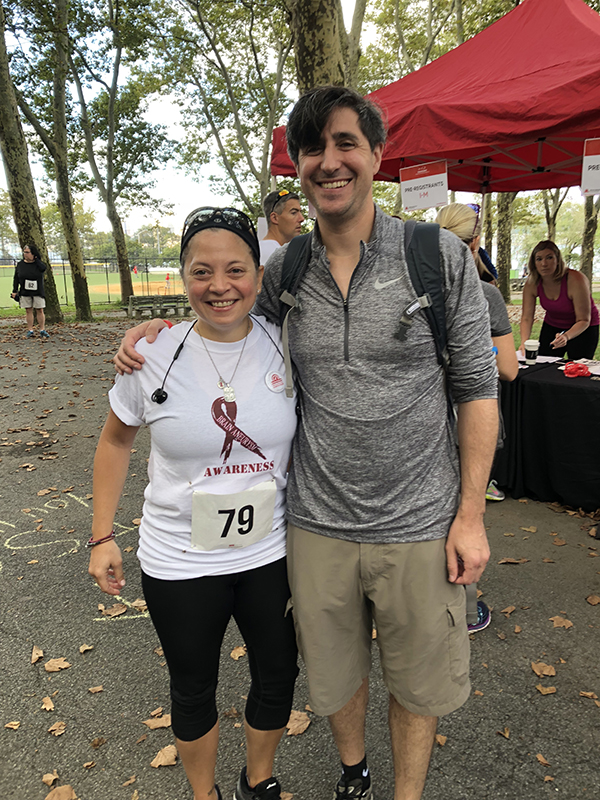