For February, Montefiore Demonstrates the Literal Steps to a Healthy Heart 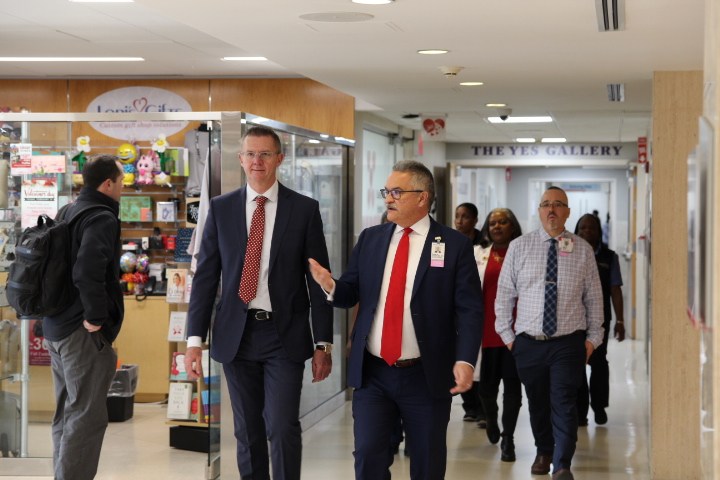 Dr. Azeem Latib stands between the living and the dead. He’s the last person patients at Montefiore Health System suffering from heart or coronary disease see should their conditions worsen.

“Ideally, I would prefer to have less patients,” said Dr. Latib. “It means that they’re getting prevention.”

And at Montefiore Einstein Center for Heart and Vascular Care, where he serves as director of interventional cardiology, Dr. Latib is also part of a contingent looking to stymie such a visit. As patients and visitors passed the Moses Campus’ vestibule on East 210th Street during mid-morning on Feb. 3, he and clinicians, nurses, and other staffers from the center demonstrated that a healthy heart simply means taking a step. And another step. And another.

As has been the case for the last 15 years, Montefiore Health System hailed February Heart Month in recognition of events highlighting the many preventative measures one can take to avoid such a deadly disease. Heart disease can be congenital, though smoking, consuming fatty foods, not exercising, diabetes, or a combination of all four can lead to conditions where arteries are blocked over time, making the heart work at greater speed. If left untreated, a stroke or heart attack can follow.

The month-long series of events geared around maintaining a healthy heart began with a walk around the Moses Campus’ so-called “Montefiore Mile” track, where the center’s staffers—some of whom decked in red shirts specially made for the event—walked four intervals around the first floor’s hallway quadrant, which equals to a mile. Leading the charge was Dr. Mario Garcia, the center’s co-director and chief of the division of cardiology, who became the source of inspiration for the 2018 short film Corazon, where actor Damián Bichir portrayed Dr. Garcia. Walking alongside him casually was Dr. Peter Semczuk, MPH, senior vice president and executive director of the Moses Campus and its sister hospital, the Wakefield Campus, sporting a red tie.

For Dr. Garcia, walking is easy, and the rewards are fruitful. “The advantage of walking is it’s easy to do. For people, sometimes when they want to get you to do physical activity, and they start with something that’s very hard, they get de-motivated and they stop very quickly. The idea is to do something that you enjoy, that you like; that it’s easy. And gradually, you increase your pace,” Dr. Garcia told the Norwood News, who backs the recommended 10,000 steps needed to maintain one’s health, provided they follow a regular 2,000-calorie a day diet. Building muscle mass also helps maintain weight, according to Dr. Garcia.

The most available state health records show that while Hispanics and African Americans in the Bronx have the most heart failure incidents, whites are more vulnerable to developing some type of heart disease. Twenty-five Montefiore clinics dedicated to preventing and treating heart disease are scattered around the borough and Yonkers, with a total of 800 staffers making up the unit.

But convincing residents to come out and ensure they have a healthy heart stands as a major challenge, according to Dr. Garcia, who pointed to the lack of easy access to public transportation and even buildings with no elevator as impediments.

Campaigns have worked before, including one that stressed the negative outcomes in not maintaining diabetes, which can also lead to limb amputation.

“When we came here there was a high incident of amputations that I saw in the Bronx—limb loss due to uncontrolled diabetes and cigarette smoking,” said Dr. Garcia. “We’ve done a number of campaign and the number of amputations has decreased considerably.”