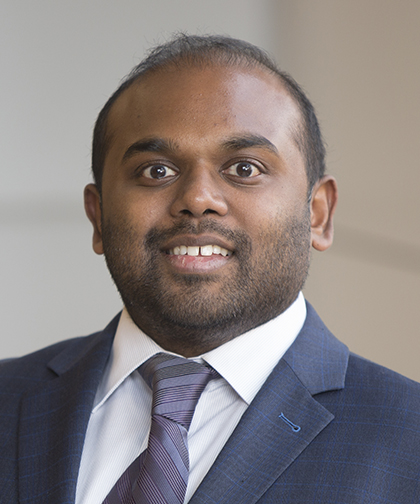 Neil Haranhalli, MD, is an Endovascular/Cerebrovascular Neurosurgeon at Montefiore and an Assistant Professor of Neurosurgery and Radiology at our Albert Einstein College of Medicine. Dr. Haranhalli specializes in the endovascular and open surgical treatment of cerebrovascular disease, including cerebral aneurysms, carotid artery stenosis, ischemic and hemorrhagic stroke, cerebral and spinal arteriovenous malformations, and chronic subdural hematomas.

In 2007, Dr. Haranhalli received his Bachelor of Arts in neuroscience at New York University. He then attended New York University School of Medicine, where he received his Doctor of Medicine in 2012. Dr. Haranhalli began his postgraduate training in 2012 with a 7-year internship and residency in neurological surgery at Montefiore, where he became Chief Resident in his final year. During this time, he also completed a year-long endovascular neurosurgery fellowship in 2018 at Mayo Clinic.

Dr. Haranhalli’s research interests include studying functional outcomes in patients who suffer either ischemic stroke and/or aneurysmal subarachnoid hemorrhage, efficacy of endovascular treatment of chronic subdural hematomas, quality measures for the treatment of acute ischemic stroke with mechanical thrombectomy and the use of advanced imaging in decision making, and prognostication of patients with acute ischemic stroke. His work has been published in numerous peer-reviewed journals and textbooks, and presented nationally.