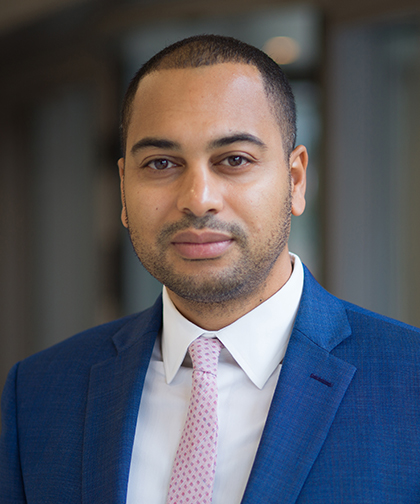 Charles C. Esenwa, MD, MS, is a Director at Montefiore’s Center for Comprehensive Stroke and Assistant Professor at our Albert Einstein College of Medicine. He specializes in vascular neurology, with a particular interest in acute stroke management and stroke prevention strategies in high-risk individuals.

After receiving his Bachelor of Science in microbiology from Penn State University in 2006, Dr. Esenwa attended SUNY Downstate Medical Center, earning his medical degree in 2010. He pursued his postdoctoral training at NewYork-Presbyterian Hospital, completing a medical internship in 2011 and a residency in the department of neurology in 2014. He was invited to complete an additional year, serving as chief resident for the department of neurology. From 2015 to 2017, he continued at the institution as a vascular neurology clinical and neuroepidemiology postdoctoral fellow. In 2017, he earned his Master of Science in neuroepidemiology from Columbia University Mailman School of Public Health.

Dr. Esenwa’s research focus is on acute stroke management, stroke risk factors, secondary stroke prevention and stroke disparities. He is interested in advancing healthcare delivery to underserved populations on the local, national and international level. His research has been published in several reviewed journals, books and abstracts.